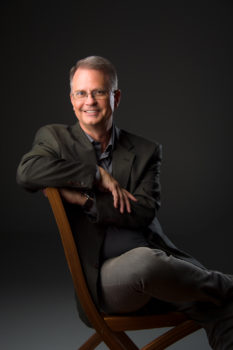 Chuck Owen is Distinguished University Professor of Jazz Studies at the University of South Florida where he also serves as the founding Director of the USF Center for Jazz Composition.  A nationally respected educator, having established and developed USF’s acclaimed jazz program; he is recognized equally for his unique compositional voice.

The recipient of a 2009 Guggenheim Fellowship, Owen has written for or had his compositions performed by the: Netherlands’ Metropole Orchestra, Brussels Jazz Orch., Smithsonian Jazz Masterworks Orch., Tonight Show Orchestra, Scottish National Jazz Orchestra, Cincinnati Symphony, and numerous others.  Owen’s primary creative outlet, however, is his own 18-piece Jazz Surge.  Founding the ensemble in 1995, Owen serves as conductor, primary composer/arranger, and producer of its five highly-feted CDs – the most recent of which, River Runs – A Concerto for Jazz Guitar, Saxophone, & Orchestra (2013) is a stunning 5 movement genre-bending work Rufus Reid describes as, “.  . . . .a tour de force of contemporary orchestral composition.”  Immediately preceding it, The Comet’s Tail (2009), was nominated for a Grammy Award and critically accloaimed as “riotous and joyous” (JazzTimes), “muscular” (Downbeat), and “deserving of universal attention” (All Music Guide)  The ensemble has been featured at prominent jazz fests as well as at conferences in New York, Atlanta, and New Orleans.  Owen is also the recipient of the 2000 IAJE/ASCAP Commission, and three Florida Artist Fellowships.

Owen has served as President of the International Association for Jazz Education, as a “governor” for the National Academy of Recording Arts and Sciences, and as a panelist for the Pulitzer Prize in Music, the National Endowment for the Arts, the Grammy Awards, and numerous regional arts associations.  The Director of the USF Jazz Ensemble for 22 years, he led the group in performances at international jazz festivals as well as with renowned guest artists such as Ray Charles, Doc Severinson, and Lionel Hampton.  He is the recipient of the President’s Award for Faculty Excellence as well as the Outstanding Undergraduate Teaching Award.

My article for the ISJAC Guest Artist Blog series entitled:  “The Problem Approaching Composition from an Improvisational Perspective”.

This incredible sculpture looks quite at home here in the mountains of North Carolina, doesn’t it!  I have rarely been as moved or touched as when the members of the Jazz Surge presented me with this piece they had specially commissioned from Penny Hardy, the British artist whose larger than life “Blown Away” sculpture is featured on our “Whispers On the Wind” CD cover.  Wow . . . . .  words still elude me . . . . . . . .!!

Two of my USF student composers have received national/international recognition and awards for their work within the last year.  Most recently, Simon Lasky (current MM student in Jazz Composition) was the winner of the British Composer Award for Best Small Group Jazz Composition for his work “Close to Ecstasy”.  The ceremony was in London with coverage and an interview with Simon by the BBC (amongst others).  Matt Horanzy’s (MM in Jazz Comp, 2018) composition “Init 1” was the national winner of both the National Band Association’s Jazz Composition Contest as well as ASMAC’s (the American Society of Music Arrangers and Composers) Bill Conti Big Band Competition.  As a result of the NBA award, the work was performed by the famed Airmen of Note in December at the Midwest Band Clinic in Chicago.  Matt has been accepted to participate in the BMI Jazz Composers’ Workshop in Fall of 2019.

Both were selected to present at the upcoming Jazz Composers’ Symposium.  Big congrats!!