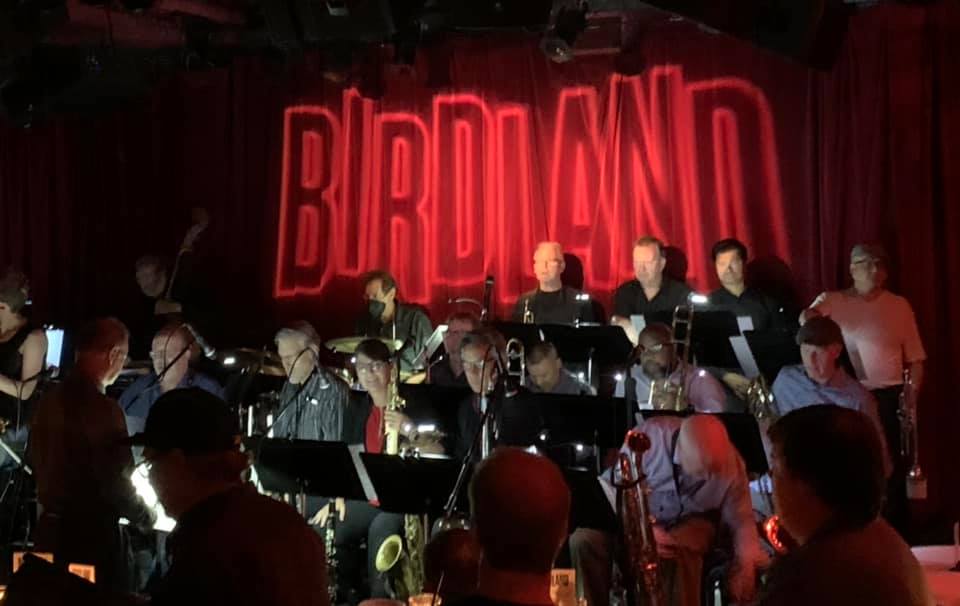 Within Us is the seventh CD released by this groundbreaking big band who recently celebrated their 25th anniversary with a sold out celebration at the renown Birdland Jazz Club in NY.  Having amassed a total of 7 GRAMMY nominations on top of international critical accolades, the Surge has been described alternatively as “inventive, colorful, playful, provocative, and swinging”.  While their first three CDs, graced with guest appearances by the likes of Nat Adderley, John Abercrombie, Benny Golson, Ingrid Jensen, & Tim Hagans, were certainly acclaimed (JazzTimes journalist, David Franklin, included the band’s eponymous 1st album in his “5 best CDs of 1996”); it was their fourth recording, A Comet’s Tail (2009), that truly catapulted the band to the attention of a world-wide audience.

Paying tribute to the incomparable Michael Brecker, “A Comet’s Tail” re-envisioned his compositions with arrangements from the likes of Vince Mendoza & Gil Goldstein, in addition to several by Chuck.  A star-studded array of guests (Randy Brecker, Joe Lovano, Dave Liebman, Mike Mainieri, Mike Stern, & Adam Nussbaum), all of whom had worked closely with Michael, joined the Surge in a spectacular recording which was nominated for a GRAMMY as well as making many jazz critics annual “best of” lists (including being named the #1 big band recording of the year by the Brazil and Argentinean jazz press). 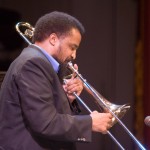 The follow-up, 2013’s, River Runs veered off in an entirely different direction . . . but to even greater acclaim!  The sub-titled “Concerto for Jazz Guitar and Saxophone” featured the Surge surrounded by a lush studio orchestra and this time garnered two GRAMMY nominations: one for Best Instrumental Composition and one for Best Instrumental Arrangement.  World Jazz News described the Surge’s performance as “explosive” and “EPIC” while the NY Music Daily praised it as being “imaginative, paradigm-shifting, and exhilarating” . . . . “combining elements as diverse as swing, heavy metal, bluegrass, and the avant-garde and making them work together seamlessly.” 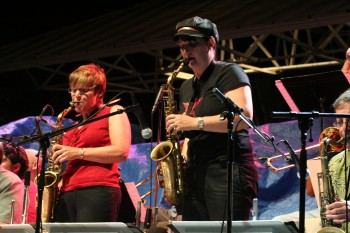 Expanding on the band’s long-simmering American folk/roots leanings, Whispers On the Wind, the ensemble’s 2017 release, blew the roof off!!  In addition to Four GRAMMY nominations, the CD was also named #1 Big Band Album in the 39th Annual Jazz Station Awards amongst many other end of year honors and accolades:  “a masterpiece” (Sounds of Timeless Jazz).  While featuring the evocative violin of Sara Caswell, the luminescent harmonica of Gregoire Maret, an array of acoustic guitars deftly played by Corey Christiansen, and the blistering trumpet of Randy Brecker; the band is alternately buoyant, playful, triumphant, melancholy, and mysterious . . . . but always coming straight out of the American Heartland.

Within Us, initially conceived as a celebration of the band’s 25th anniversary, saw recording & production delayed due to Covid.  When the band was finally able to come together to record (the 1st time most had been in a recording studio since the virus hit), the theme had shifted to the value of community and of gathering, and the joy of creating music in person.  Featuring a guest stint by Warren Wolf on vibes and marimba the album was cited as one of 2021’s best by several critics and called, “One of the best large jazz ensembles in the country”, by the NY Music Daily and Lucid Culture. 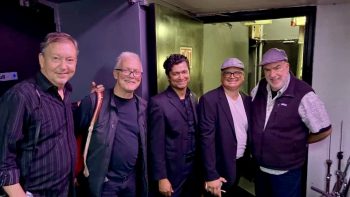 The Surge has performed frequently throughout Central Florida where approximately 2/3rds of the band resides.  From 2005-09 they served as the resident orchestra for the USF Center for Jazz Composition’s “Jazz Masterwork’s Series”; backing a constant stream of renowned guest composers such as Bob Brookmeyer, Chick Corea, Slide Hampton, Bill Holman, Jim McNeely, Bob Mintzer, & Gerald Wilson, amongst others.  In addition, the Surge has been featured at prestigious conferences or jazz fests.  In 2011, at the JEN Conference in New Orleans, the ensemble performed works from “Comet’s Tail” along with guests Dave Liebman and Randy Brecker.  Two New York appearances included the premier of Chuck’s 2001 ASCAP/IAJE commissioned work as well reprising cuts from “Here We Are” with Ingrid Jensen and Rob Thomas in 2004.  Most recently, the Surge debuted material from “Whisper’s On the Wind” in tandem with Randy Brecker & Gregoire Maret in a heady performance before a capacity crowd of internationally noted jazz composers and arrangers (including Hall of Fame honoree, Chick Corea) at the 2017 Jazz Composers’ Symposium in Tampa. Other significant performances have included appearances at Festival Production’s Verizon MusicFest, several turns at the Clearwater Jazz Fest, and the aforementioned Birdland Jazz Club appearance.

When first forming the ensemble, Chuck initially conceived of a jazz repertory ensemble that might serve a region well beyond its Tampa base.  He, therefore, adopted the “South Eastern Repertory Jazz Ensemble” or SERJE as its initial name.  After the first few rehearsals, however, Chuck was so enamored with the personnel and thrilled with their interpretation of his music that he decided to claim it almost exclusively for himself.  SERJE, therefore, became Surge and for the next 10 years the band performed virtually no music other than that of Chuck’s.

In 2004, however, another venture of Chuck’s was launched – the USF Center for Jazz Composition.  With the Center’s ambitious and broad-ranging programming, the need for a resident jazz orchestra was quickly apparent . . . and fell to the Jazz Surge.  So, in April 2005, the CJC debuted its Jazz Masterworks Series.  For the next 3 ½ years the Surge performed over 35 concerts, introducing audiences throughout Central Florida to classic jazz repertory while backing a continual stream of renowned guest jazz composers/artists.  Included in this group were luminaries such as:  Karrin Allyson, Randy Brecker, Chick Corea, Nneena Freelon, Slide Hampton, Bob Mintzer, and Gerald Wilson.  During this same time, the CJC twice hosted the International Jazz Composers’ Symposium – bringing jazz composers from all over the country (and beyond) to Tampa for 3 days of lectures, workshops, concerts, and new music sessions.  Once again, the Surge served as official ensemble-in-residence reading the compositions of over two dozen composers by day, while presenting the music of several of the featured guest artists – Bob Brookmeyer, Bill Holman, & Jim McNeely – in concert at night.  However, the largest project the Surge undertook in conjunction with the CJC was the Michael Brecker Tribute project that, ultimately, led to the production of A Comet’s Tail. 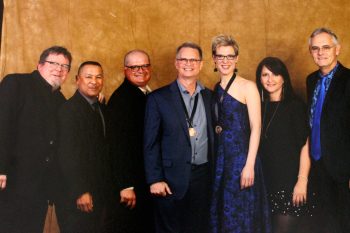 Backgrounds of the remarkable personnel of the Surge are as varied as their talents – the only commonality being their dedication to their craft and a list of personal performance credits a mile long!  Most work as free-lance musicians.   At present, however, eight are also tenured or tenure-track professors (at 6 different Universities), one works for a prominent music manufacturer, and one is employed as an engineer!  Like many great bands, the ensemble’s make-up has been incredibly stable over its now 27+ years – with 6 of today’s band members appearing on its first CD (as well as every recording since) and only one position having changed more than once during that time.

What Others Have Said About the Jazz Surge . . . . 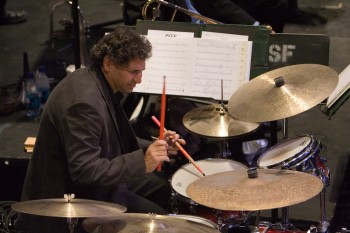 “The Jazz Surge is everything a big band ought to be and more — jubilant, rhythmic, swinging, dynamic, respectful of tradition, yet bold and forward-looking.”… Monarch Magazine

“What a stellar band it is!”… Textura

“NOT your mother’s big band!”… All About Jazz

“. . . the ensemble lets out all the stops to bring the session to a thunderous climax. A superb big band… Cadence, Jack Bowers

“. . . .a progressive big band playing at its finest.” All About Jazz, Dave Nathan

“The band is sensational. Their playing is cohesive, energetic, and absolutely in sync.”… Saxophone Journal, Billy Kerr