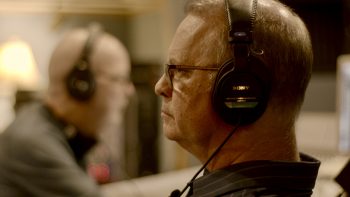 However, since 1995, Owen’s primary creative outlet has been his own 19-piece Jazz Surge.  Serving as conductor as well as primary composer/arranger, he has produced each of the Surge’s 7 highly feted CDs.  Whispers On the Wind, released in 2017, was recognized with 4 GRAMMY Nominations (including for best composition) while also named #1 Big Band Album in the annual Jazz Station Awards.  River Runs (2013), a stunning 5-movement genre-bending orchestral/big band hybrid and The Comet’s Tail (2009) also received GRAMMY nominations.

Their most recent (2021) recording Within Us was released to widespread acclaim, named on several prominent jazz critics’ “Best of 2021” Awards, and celebrated with a sold-out performance at New York’s Birdland Jazz Club (former Surge guest artists, Randy Brecker and Gregoire Maret joining in on the fun).  Celebrating their 25th anniversary as well as their re-emergence following Covid, the album continues to shine a spotlight on Chuck’s thoughtful, evocative, and intensely personal writing (work that is steeped in the jazz tradition but draws liberally and often playfully from a diverse array of influences) as well as the palpable comradery and musical prescience of an ensemble for whom playing together has become second nature.  As in prior releases, Owen continues to expand on his American folk/roots leanings, enlisting the evocative violin of Sara Caswell as well as an array of acoustic guitar deftly played by Corey Christiansen.  It’s work that is, at times, buoyant, playful, and triumphant – at others, melancholy and mysterious; but always coming straight out of the American heartland.  Vibraphonist extraordinaire, Warren Wolf, makes a scintillating guest appearance.

“ . . . a joy and an inspiration, hands-down one of the top ten jazz albums of the year.” delarue, NY Music Daily / Lucid Culture

“Within Us” is a gem. . . . . . . pick a track, any track, and you will hear excellent writing, splendid musicianship, and memorable solos.” – Richard Kamins, Step Tempest

“It kills—brimming with a vivid array of colors (including violin and dobro) and shifting dynamics. . . . .  at once challenging and eminently listenable, . . . .a seamless stream of grabby melodies and solos.”  – Eric Snider, Creative Loafing

“. . . a set of compositions that are as personal, eclectic, and ambitious as anything that Owen has penned. – Phillip Booth, Jazz Times

“Nothing, not even a pandemic that silenced and stupefied most artists into submission, could tamp down Owen and his ensemble’s cinematic majesty.  If you listen closely, you can hear Chuck Owen’s heart and soul.”  – Carol Banks Weber, Festival Peak 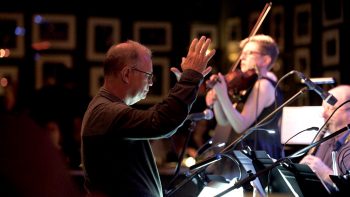 While the earliest Surge albums captured the imagination of critics and audiences alike (their 1st album residing the Jazz Radio top 50 for over 8 weeks), it was the Surge’s fourth recording, The Comet’s Tail (2009), that truly catapulted the band to the attention of audiences around the world.   Celebrating the compositional output of the late jazz icon, Michael Brecker, the project of re-envisioned his work through the eyes of a variety arrangers in addition to Owen himself (including frequent Brecker collaborators, Gil Goldstein & Vince Mendoza).  Also joining the Surge were a host of special guests (Randy Brecker, Dave Liebman, Joe Lovano, Mike Mainieri, Adam Nussbaum, & Mike Stern) with close professional and personal ties to Michael.  Described as “riotous and joyous” (JazzTimes), “muscular” (Downbeat), and “deserving of universal attention” (All Music Guide) the project received a 2009 GRAMMY nomination, along with many “best of the year” mentions.

In 2013, Owen and the Jazz Surge shifted gears dramatically, releasing River Runs, A Concerto for Jazz Guitar, Saxophone, & Orchestra – a 5-movement, hour-long, genre-bending composition that draws its inspiration from various American Rivers, . . . . and, specifically, Owen’s float trips down them.  Composed under the auspices of a prestigious Guggenheim Fellowship, it was recognized with two GRAMMY nominations (Best Instrumental Composition & Best Instrumental Arrangement) – the work soaring majestically through a unique blend of large-scale symphonic forces, propulsive jazz rhythms, evocative solos, and tinges of American folk/roots music (Owen at one point referencing – and thoroughly deconstructing- the well-known “Shenandoah”).

“ . . . a masterpiece of aural sounds; a dazzling array of prismatic colors and textures that envelop the listener in a splendidly evocative way.  Owen masterfully creates his cinematic music in such a way as to seamlessly meld modern jazz improvisation with more traditional orchestrations and the result is a marvelous amalgam of the two.  Mr. Owen has proven himself to be a compositional force to be reckoned with.”   Huffington Post

“ . . . .it’s as if Owen has captured an entire ecosystem with its messy, sometimes awe-inspiring, sometimes opaque, frequently frightening detail.  Like water, Owen’s music will go everywhere it can . . . . .imaginative, paradigm-shifting and often exhilarating . . . combining elements as diverse as swing, heavy-metal, bluegrass, and the avant-garde and making them work together seamlessly.”   NY Music Daily

“. . .remarkably beautiful music . . . on the model of such predecessors as Gershwin’s ‘Rhapsody in Blue’ or Duke Ellington’s ‘A Tone Parallel to Harlem’.”  Seattle Post 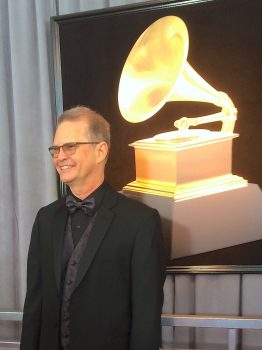 It was hard to imagine how Chuck and the Surge would follow the critical success of “River Runs”, yet 2017’s Whispers On the Wind did so quite admirably garnering 4 GRAMMY nominations (Best Large Jazz Ensemble Album, Best Soloist, Best Instrumental Composition, & Best Instrumental Arrangement).   A suite of 7 pieces linked by a somewhat ethereal examination of the American tradition through it’s landmarks, folklore, heroes, and myths, Owen drew inspiration from quotes of authors Stephen King, Larry McMurtry, and Cormac McCarthy associating 2 or 3 with each piece.  His music displays a clear affinity for the local color, wry sense of humor, unique personalities, strong sense of place, and disarmingly unsentimental honesty for which these authors are noted.  Guest stints by Randy Brecker and harmonica virtuoso, Gregoire Maret as well as Owen’s own contributions on Accordion and Hammered Dulcimer lent the project contribute to the unique sound and atmosphere of this project. 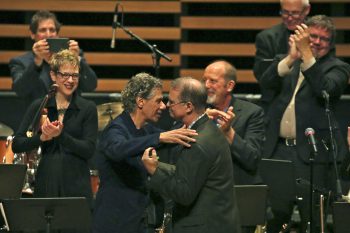 Throughout the years, the Surge has performed at a wide range of festivals, conferences, and clubs; serving as the resident orchestra for Central Florida’s Jazz Masterworks Series as well as the International Jazz Composer’s Symposium.  These events, produced by Owen (originally in conjunction with the USF Center for Jazz Composition (CJC) and, more recently, via the International Society of Jazz Arrangers and Composers (ISJAC)), resulted in a steady stream of performances with noted jazz composers such as: Bob Brookmeyer, Chick Corea, Frank Foster, Slide Hampton, Bill Holman, Jim McNeely, Bob Mintzer, and Gerald Wilson along with many others.

Currently, Owen is preparing the release of his first album project with the great WDR big band (an early 2023 release is planned).  Entitled Renderings, the album consists primarily of Owen’s highly original re-imaginings and was recorded in 2021.  Additionally, he recently re-launched “ReSurgence”, a sextet derived primarily from the members of the big band.  The group (in which Owen has returned to playing piano publicly) offers a new canvas for his musical landscapes and is expected to lead to the release of their first recording in later 2023 or 2024.

Throughout his career, Owen has undertaken a diverse body of commissions and projects.  In addition to the Guggenheim Fellowship, Owen has been the recipient of the prestigious 2000 IAJE/ASCAP commission in honor of Louis Armstrong and three Florida Artist Fellowships.  He has over 100 works published and is a frequent guest artist, clinician, and lecturer at universities throughout the country.

Born in Norfolk, VA, Owen spent his elementary school days in Omaha, NE before his family moved to Cincinnati.  Following a year at the College of Wooster (OH), Owen matriculated to the University of North Texas where he received a BM in Music Education (trombone concentration).   There, a host of mentors and friends, along with a dozen jazz “lab” bands all hungry for new music, proved the perfect incubator for a budding composer/arranger.  He went on to earn a Master’s degree in Orchestral Conducting at California State University, Northridge before spending another couple of years in Los Angeles free-lancing and apprenticing with film/TV composer, Patrick Williams, via a NEA Study Grant.

In 1981, Owen moved (along with his wife and 3-month old daughter) to Tampa to accept the first dedicated faculty post in Jazz Studies at the University of South Florida.  With the enviable and exhilarating opportunity to build a program from scratch – designing virtually every facet of the curriculum and degree programs – Owen immersed himself in teaching.  USF Jazz Studies Program quickly became acknowledged as one of the nation’s best.  Accorded with the honorific title/rank of, “Distinguished University Professor”, Owen was recognized by USF with its Outstanding Undergraduate Teaching Award, President’s Award for Faculty Excellence, and Outstanding Research Award.

In 2004, Owen founded the USF Center for Jazz Composition, a long-held vision espousing a mission that sought to illuminate the role of the composer in jazz as well as to assist in its continuing development.   The CJC launched several prominent programs:  the Jazz Composers’ Symposium, the International Jazz Arranging Competition, & Central Florida’s Jazz Masterworks Series, before funding ceased in the 2008 recession.  Nevertheless, it served as the model and “proof of concept” for the formation of ISJAC, the International Society of Jazz Arrangers & Composers, in 2015.  Embraced enthusiastically by a world-wide membership of composers and institutional partners, ISJAC offers an array of programming, commissions, and professional support for its members anchored by its signature bi-annual Jazz Composers Symposium

In August of 2021, after 40 years, Owen retired from the University of South Florida and has been accorded the title of “Professor Emeritus”.  He continues to serve as President of ISJAC (International Society of Jazz Arrangers & Composers), an organization he was instrumental in founding, while formerly serving as President of IAJE, as well as a panelist for the Pulitzer Prize in Music, the National Endowment for the Arts, ASCAP, the Recording Academy, the Florida Division of Cultural Affairs, and numerous others.  He has produced the International Jazz Composers’ Symposium 5 times (in Tampa, Colorado, & Austin, TX), the Jazz Masterworks Series, a number of collegiate jazz fests, and all of the Surge recordings.  He is the author of several articles on jazz composition and for years routinely reviewed new music for the Jazz Educators Journal.