About the Center for Jazz Composition 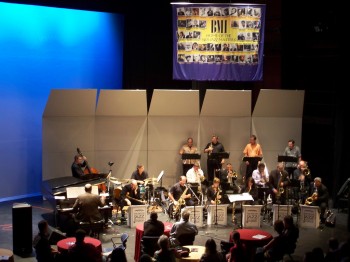 The Center for Jazz Composition was founded in 2004 as a formal research off-shoot of the University of South Florida School of Music and College of The Arts.  Dedicated to assisting the continued worldwide growth, development, and appreciation of the role of the composer in jazz, the CJC is the only known institute of its kind.  Its first programs were launched in 2005/2006 – envisioned and directed by Chuck Owen.  Included in these, was the International Jazz Composers’ Symposium which immediately brought the Center to the attention of a worldwide jazz community and ultimately drew over 100 composers from 35 States, Canada, and Europe to the USF campus along with guest artists Bob Brookmeyer, John Clayton, and Dave Douglas and a distinguished panel of music industry representatives.

For most in the immediate Tampa Bay area, the most visible component has undoubtedly been the Jazz Masterworks Series.  This performance/repertory series, featuring the CJC’s acclaimed ensemble-in-residence, the Jazz Surge, has brought renowned guest artists and composers to multiple performance venues throughout the Central Florida region.  Guest artists have included:  Chick Corea, Bob Mintzer, Slide Hampton, Gerald Wilson, Nneena Freelon, Karrin Allyson, Randy Brecker, and numerous others.  Through this series, and augmented by its own research endeavors, the Center seeks to assure continued public access to a rich legacy of classic jazz repertory as well as exposure to contemporary, cutting-edge new works.

In 2007, the Center announced its 1st International Jazz Arranging Competition as well as its first major arranging commissions.  Designed to pay tribute to legendary jazz artist, Michael Brecker, and to encourage new exploration/interpretation of his compositions; over 80 arrangements were submitted to the Center from throughout the U.S., Canada, Europe, and South America.  A panel selected winners in two divisions: Fred Stride (Vancouver) & David Peoples (Memphis), the student division winner.  These new works were premiered by the Jazz Surge along with special guest, Randy Brecker, in conjunction with the Jazz Masterworks Series.   Fred Stride’s torrid arrangement of “Peep” was also recorded as part of the CJC’s first national CD release, The Comet’s Tail, along with commissioned works from Vince Mendoza & Gil Goldstein and contributions from Dave Stamps & Chuck Owen. 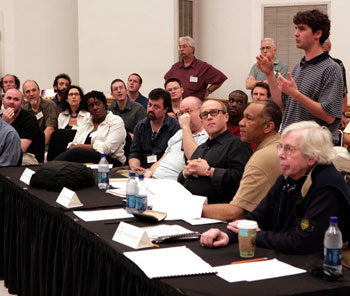 The second International Jazz Composers’ Symposium (2008) followed in the footsteps of the first rendition with 3 days of lectures, master classes, concerts, new music reading sessions, panel discussions, and research presentations held on the oak-shaded campus of the University of South Florida.  Guest artist/composers this time around were Stefon Harris, Bill Holman, Jim McNeely, and the Turtle Island String Quartet with50% more new music readings given than in 2006.  The vibe was great and the response was, once again, overwhelmingly positive.

Central to the CJC’s research initiative is the acquisition of a substantial, comprehensive library of scores, recordings, references, and artifacts relating to jazz composition.  Currently the Center’s resources are available to scholars and the public on a limited basis.  In the future, however, the CJC hopes to launch a number of unique web resources making its holdings and initiatives available to a much broader and far-flung audience. 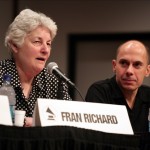