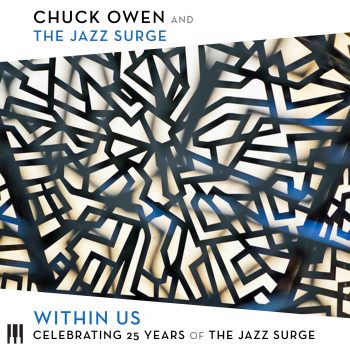 On Sept. 17th, the Jazz Surge released it’s 7th album in tandem with celebrating its 25th anniversary.  Recorded in May of 2021 while just emerging from the isolation of Covid, “Within Us” (Summit/MAMA Records) has been greeted with wide-spread accolades:

“It kills—brimming with a vivid array of colors (including violin and dobro) and shifting dynamics. . . . .  at once challenging and eminently listenable, . . . .a seamless stream of grabby melodies and solos.”  Eric Snider, Creative Loafing

“Chuck Owen is a master in delineating rhythmically and timbrically compelling arrangements, where the orchestral dynamics leave continuous spaces for the relationship with the soloists.” Angelo Leonardi, All About Jazz, Italia

“Nothing, not even a pandemic that silenced and stupefied most artists into submission, could tamp down Owen and his ensemble’s cinematic majesty.  If you listen closely, you can hear Chuck Owen’s heart and soul.” Carol Banks Weber, Festival Peak

“Within Us” is a gem.”  Richard Kamins, Step Tempest

“Owen is revealed as one who well versed in both jazz and classical modes producing music of considerable finesse, rich in detail and harmonic sophistication, at turns powerfully exultant, sharp, incisive and evocatively elegiac in both the articulation of his themes and in support of the soloists. . . . . . . an heir to Ellington and Gil Evans.”   Euan Dixon, Jazz Views