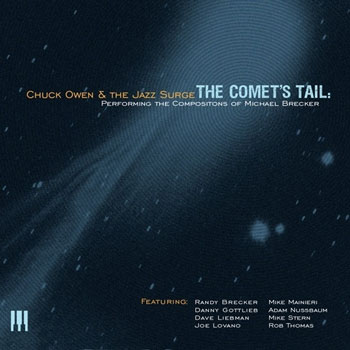 The Comet’s Tail: Performing the Compositions of Michael Brecker” is garnering rave reviews just weeks after being released by MAMA Records.
– “Sensational.  One of the year’s great jazz discs.”  – Buffalo News
– “A truly outstanding recording.  Explosively played. . . . larger than life versions. . . .opulent far beyond anything that might be construed as conventional.   Deserving of universal attention.”  – Michael G. Nastos, All Music Guide
– “This one’s a memorable gem.”  – Jazziz
– “Throughout my 27 years at WBGO, quite a few “tribute” records have come across my desk. I have to tell you “Comet’s Tail” is certainly one of the finest, capturing the spirit, passion, brilliance and magnificent compositions we all enjoyed through Michael’s genius.  An extremely well told tale of this comet!” – WBGO Music Director, Gary Walker.
– “Incredible, fantastic, and a true masterpiece of music.  Not only one of the better big band recordings I have ever heard but also one of the best recordings . . . . .ever.”   Harry Schnipper, Exec. Dir., Blues Alley, Wash., DC

A departure from previous Surge releases, this one is produced in tandem with the USF Center for Jazz Composition and pays tribute to the compositions of jazz icon, Michael Brecker, by re-envisioning them through the eyes of various arrangers including frequent Brecker collaborators, Gil Goldstein & Vince Mendoza, Vancouver composer Fred Stride (winner of the CJC’s International Jazz Arranging Competition), Dave Stamps, and, of course, Chuck himself.  Joining the Surge are a host of special guests (Randy Brecker, Dave Liebman, Joe Lovano, Mike Mainieri, Adam Nussbaum, & Mike Stern) all of whom shared the bandstand on numerous occasions with Brecker.  Also back in a prominent role is Rob Thomas, NY based violinist extraordinaire.

This project was initially conceived in the spring of 2006 as an outgrowth of the mission of the fledgling University of South Florida Center for Jazz Composition.  Then CJC Managing Director, Dave Stamps, and I were flush with enthusiasm and energy from having just mounted the very first Jazz Composers’ Symposium (a second followed in June of ’08) which brought guest artists Bob Brookmeyer, John Clayton, & Dave Douglas together with over 100 jazz composers from across the country, for 3 days of discussions, workshops, sharing ideas, and hearing new music.  What a hang!  Knowing expectations for the Center had just taken a giant step forward, we sought an encore that would be as significant as the Symposium while embracing other aspects of the CJC’s very ambitious and broad-based mission.  Specifically, we wanted to mount a project that would focus attention on an established composers’ body of work . . . . paying homage to it, of course . . . . . but re-examining and re-envisioning it as well.  Ultimately our goal was not only to shed new light on the existing work but to serve as a catalyst to stimulate the creation, premier, and publication of related new works as well.  While we recognized this would have to be a multi-faceted project – it was quite clear that the composer we selected to pay tribute to would be the glue that held it all together.

Michael Brecker has been universally acknowledged  and feted as one of the most remarkable, influential, and exhilarating saxophonists of his time.  His blinding brilliance as a performer/improviser in some ways, however, may have inadvertently overshadowed or simply redirected attention away from his output and effectiveness as a composer.  While I was as much a fan of Michael’s otherworldly playing as anyone, I had often felt his recordings were equally as distinctive for their unique compositional “voice” and attention to compositional detail.

So, in the summer of 2006, with the goal of exploring and further illuminating the “flip side” of this remarkable musician’s talents; the CJC’s International Jazz Arranging Competition in honor of Michael Brecker was launched   By winter, “Peep”, the no-holds-barred arrangement that kicks off this CD (from the pen of Vancouver-based composer Fred Stride) was selected from over 80 arrangements submitted by composers throughout the U.S., Canada, Europe, and South America as the winning entry.  During this time the CJC also commissioned arrangements from frequent Brecker collaborators, Vince Mendoza & Gil Goldstein.  Each selected a piece of his own choosing, with Gil opting to re-orchestrate a tune he had just finished arranging for Michael’s last recording, “Pilgrimage”.  These charts, along with arrangements Dave Stamps and I were crafting, were all slated to premier in a concert tribute to Michael in Tampa, Orlando, and St. Pete, Florida in April of 2007 as part of the CJC’s ongoing Jazz Masterworks Series.

Tragically, in January of 2007 Michael’s untimely death devastated the entire music industry along with legions of friends and fans.   While his search for a suitable bone marrow match to fight the ravages and debilitating effects of MDS was well-chronicled, we had always harbored the hope that Michael’s health would allow him to be present for the premier(s) or, at the very least, to delight in hearing the results of the reworking of his compositions.   With his passing, however, this vision was irrevocably altered and continuing the project was questioned.  While the Center’s once buoyant enthusiasm had been replaced by a mood of somber reflection, clearly however the project remained not only a poignant tribute but a wonderful celebration of a great and beloved artist’s work.  It was in that spirit, therefore, that the premiers, subsequent concerts, and recording moved forward.

It’s hard for me to imagine this project without Randy Brecker’s involvement. Fortunately for us, he not only graciously agreed to participate, he somehow managed to “massage” his schedule (enduring a brutal Europe-US turnaround) in order to participate as the featured guest artist in the three April concert premiers.  (Rob Thomas, who through his repeated appearances with the Surge has become virtually its 18th member, also guested on these concerts).  The performances were simply electric! . . . . . . . Randy’s presence and transcendent solos visibly providing the ultimate link for the audience to Michael’s music.  The first two recording sessions fell immediately thereafter.

Six months passed before the next sessions.  Then, in October, the Jazz Surge reprised the material (with two new charts added) at the Clearwater Jazz Holiday before 10,000 screaming fans of Michael’s music – this time with Mike Mainieri (Michael’s Steps/Steps Ahead bandmate) and Adam Nussbaum sitting in alongside Randy.  The final sessions quickly followed.

The remarkable line-up of guest artists on this CD, all of whom had close musical relationships with Michael, clearly adds a poignancy that elevates their contributions beyond the typical solo turn.   Each, I believe, sought to find a way to express their feelings about this incredible man . . . . . with their very appearance on this recording intended as a personal tribute.   The performances, as I’m sure you will agree, are truly amazing!!  I can’t thank all of them enough!

Yet the focus on this recording remains firmly on the compositions of one Michael Leonard Brecker.   The eight pieces selected span some 25 years and are culled from 7 different recordings (including two issued by Steps Ahead).  The musical and stylistic breadth is equally astonishing. Those familiar with the original renditions will undoubtedly note the profound respect each arranger accords Michael’s work.  And yet, each arranger finds a way to inject a little of themselves . . . or, more accurately, to allow us to view Michael’s music the way they view it.  It’s a fascinating glimpse.

For me, however, the most remarkable aspect of working on this project was the opportunity not just to reacquaint myself with Michael’s compositions but to thoroughly explore them.  No matter how well I thought I knew these pieces (and I thought I knew many of them well!), I was constantly discovering hidden facets, encountering subtle playful twists I had missed before, and being absolutely captivated by the stunning melodic beauty of these musical gems I was so privileged to “re-cut”.  If you listen carefully I’m confident you will find them too. . . . .and undoubtedly much, much more.